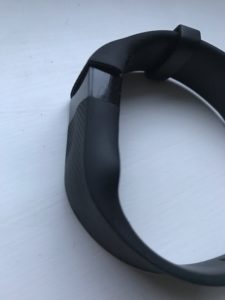 As I (currently) write this – I’m wearing a wearable on each wrist.  Not long ago this would be joined by another in my trainer, or one on my belt.   If you include headphones (which I guess in todays “bluetooth only” world, may be considered a wearable), that’s a lot of tiny batteries to keep charged, and a lot of wireless connections to drain my battery.

But really – that’s not the worst of it.  The worst thing is – is that they’re wearable.

We’ve been wearing watches on our wrists for decades, and keeping them in our pockets for even longer (which could be likened to Fitbit’s evolution from belt clip to wrist also).  I even have two of these watches I’ve inherited from my great grandparents.   They are wonderful examples of human engineering, especially considering the age in which they were built.  They look (nearly) as good today, as they day they were made, and can be restored to look amazing.

Lets compare that with the state of my Fitbit.

Now I’m not saying that I’m truly comparing a Fitbit to a pocket watch – for one the Fitbit is *probably* more expensive in terms than an old pocket watch (or at least that’s what eBay prices would make me think).  If I include my Apple Watch (the other wrist), a Series 2 less than 4 months old that has already been replaced, it certainly makes me wonder where we’ve gone wrong that we’re making items today that are so flimsy and brittle that they can’t last the month – let alone the lifetime.

Perhaps we have some time before materials science catches up with technology – but it does seem a shame that we can’t create objects any more that are there to stand the test of time.

If you want to learn more about how things are made, I suggest Mark’s review of “Stuff Matters” a great book that breaks down every day life, and explains just why it all matters.